Covid-19 Resources for People with ME

Never miss a beat! Subscribe to our newsletter and select “Daily Digest” to get a summary of the day’s news & actions delivered to your inbox.

March 31, 2020 / #MEAction / No Comments on NICE suspend work on new ME guidelines
The National Institute of Health and Care Excellence (NICE) have suspended work on all guidelines currently in development due to the Covid-19 pandemic, including their update of the ME/CFS guideline, originally due to be published October 2020 and recently delayed by NICE to December 2020. We support NICE’s aim to ...
facebooktwitter

March 25, 2020 / Jennifer Brea / No Comments on Saturday, March 28th: Crip Camp virtual screening and Q&A
At the Sundance Film Festival in January, I had the privilege of watching Crip Camp, a documentary film that premieres today on Netflix. It's about building a community in spite of a world that excludes you; that often tries hard to deny your humanity or ignore your very existence. It's ...
facebooktwitter

APPG on ME: Biomedical Research Meeting

March 17, 2020 / #MEAction / No Comments on APPG on ME: Biomedical Research Meeting
The All-Party Parliamentary Group (APPG) on ME held its first meeting on March 3, where biomedical research was discussed. Twenty MPs attended or sent staff to hear about the urgent need for biomedical research, following its inaugural AGM in January. Chaired by Carol Monaghan MP, the meeting was the first
facebooktwitter

March 12, 2020 / #MEAction / No Comments on Covid-19 #MillionsMissing Update
The situation of COVID-19 is rapidly changing. We wanted to be optimistic that this situation would improve for the better, but even in the last 48 hours the situation has dramatically shifted. The WHO is officially classifying the virus a pandemic. COVID-19 is now affecting more than 127,000 people worldwide.
facebooktwitter

Sign-up to Attend a Webinar for COVID-19 (Coronavirus) Preparation for people with Chronic Illnesses in the U.S.

March 2, 2020 / #MEAction / 1 Comment on Sign-up to Attend a Webinar for COVID-19 (Coronavirus) Preparation for people with Chronic Illnesses in the U.S.
The Cranky Queer Guide to Chronic Illness and #MEAction are co-sponsoring a webinar on COVID-19 (Coronavirus) prep, this Saturday March 7th, at 1:00 Eastern Standard Time. The fear of the coronavirus is affecting many of our lives, but this webinar will focus on Lifesaving, practical tools and support for preparedness
facebooktwitter

Next Steps for the APPG on ME in the UK

February 19, 2020 / #MEAction / No Comments on Next Steps for the APPG on ME in the UK
#MEAction and the ME Association are both delighted that Carol Monaghan (MP for Glasgow North-West) has re-established a new All-Party Parliamentary Group (APPG) on ME. This is a parliamentary initiative for which the ME Association will be providing secretariat support. The purpose of the APPG on ME is to seek
facebooktwitter

February 18, 2020 / Dylan Murphy / No Comments on Meet the Scientist: Interview with Dr. Lucinda Bateman
Dr. Lucinda Bateman has treated over a thousand patients with chronic fatigue conditions since starting the Fatigue Consultation Clinic in 2000. She is the founder and Chief Medical Officer of the Bateman Horne Centre of Excellence (BHC) for ME/CFS and Fibromyalgia in Salt Lake City, Utah. In 2015, Dr. Bateman
facebooktwitter

The EU Committee on Petitions is preparing a resolution on ME

Another No from NICE – Take ME Seriously

February 5, 2020 / #MEAction / 3 Comments on Another No from NICE – Take ME Seriously
As publication of new ME guidelines are delayed, NICE once again refuse to take action to mitigate the harmful recommendations that still stand in the existing guideline. Join us as we send them a giant card and tweet them so that they see the damage their guidelines have caused. Read
facebooktwitter

Musician with ME Releases Album, ‘The Canary Collective’

February 3, 2020 / #MEAction / 1 Comment on Musician with ME Releases Album, ‘The Canary Collective’
#MEAction sat down for an interview to catch up with songwriter and ME activist Kaeley Pruitt-Hamm, who in 2017 inspired MEAction to launch a virtual art and music concert called BedFest to showcase the artistic talent of the ME community, and also to explore the experience of having ME through
facebooktwitter

January 28, 2020 / Jaime S / No Comments on Celebrating Postcards to Doctors: Final Report
We're incredibly pleased to announce that we not only met but exceeded our initial goal of sending 6,000 postcards out into the world! And we could not have done it without you. As always, I am bowled over by our community's drive to fight for change. Check out our infographic
facebooktwitter

January 23, 2020 / Ingebjørg Midsem Dahl / 4 Comments on Charging Your Batteries
Ingebjørg Midsem Dahl has severe ME, and has written a book about pacing called, "Classic Pacing for a Better Life with ME." She attributes her slow but steady improvement from being severe to now only housebound to following her own advice on pacing, and from various medical treatments, such as
facebooktwitter

January 17, 2020 / #MEAction Scotland / 3 Comments on #MEAction Scotland’s Petition: Progress Continues
On Thursday 19th December, 2019 the Scottish Parliament’s Public Petitions Committee met to continue its consideration of #MEAction Scotland’s petition, PE1690, which calls for a review of treatment of people with myalgic encephalomyelitis (ME) in Scotland. Appearing before the committee to give evidence were Jeane Freeman, the Scottish Government’s Cabinet
facebooktwitter
Share Tweet Email
Submit news

Most people don't take the time to donate but if every visitor pledged just $2 per month on a recurring basis, we could fully fund #MEAction.

Get updates on major news and action alerts
Daily Digest

Receive a summary of new articles and actions, delivered to your inbox every morning

Follow @meactnet
#MEAction Network @MEActNet
13 hours ago
What tee are you choosing? Here is a closer view of the new design for our community-themed #MillionsMissing shirt! You can purchase now to help better ensure that you will have it for May as shipping might be delayed at this time due to #pandemic. #pwME
https://t.co/SecpnyrRPx https://t.co/hlxCisOAIc
View on Twitter 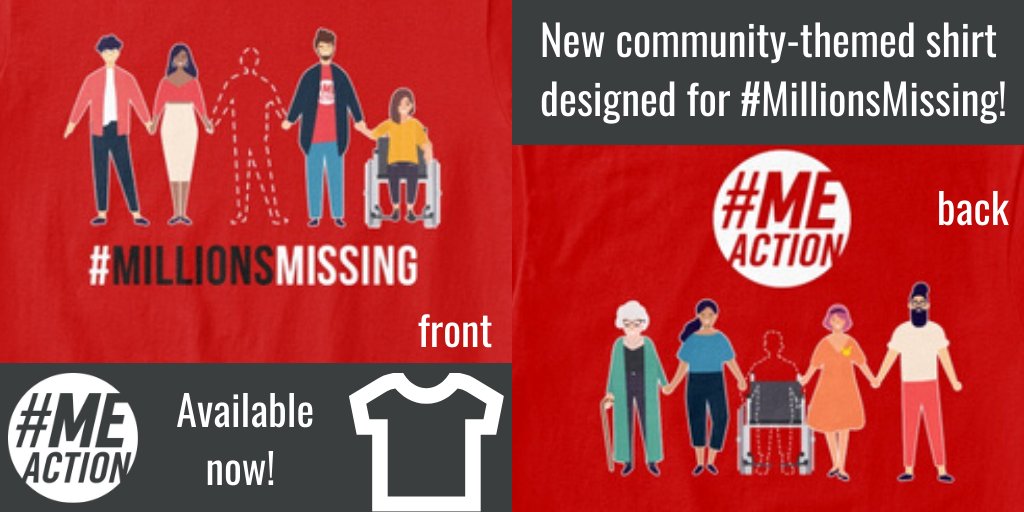