CA Senate will Vote on Resolution for ME/CFS Thursday – Call your Senator!

California – A resolution to proclaim May as Myalgic Encephalomyelitis / Chronic Fatigue Syndrome Awareness (ME/CFS) Month will go before the California Senate this Thursday.

Now, is a great time to educate your California Senator about ME/CFS, and let them know that you are a constituent who cares about this cause. Even though the resolution (which is non-binding) will almost certainly pass, the bill serves as a good jumping-off point for you to acquaint your senator with the challenges facing people with ME/CFS in California, and the urgent need for change.
Remember: one day your California Senator may move on to become influential in Congress or other government agencies.
(See sample script of how to find your Senator and what to say below.)
Bay Area resident, Mark Camenzind, has worked tirelessly to push the Resolution through the House with the help of Senator Steve Glazer and Assemblywoman Catharine Baker. Mark’s son, Tom, became very ill with ME/CFS three years ago during his sophomore year studying computer science at Stanford. Tom is completely bed-bound, unable to eat or speak. 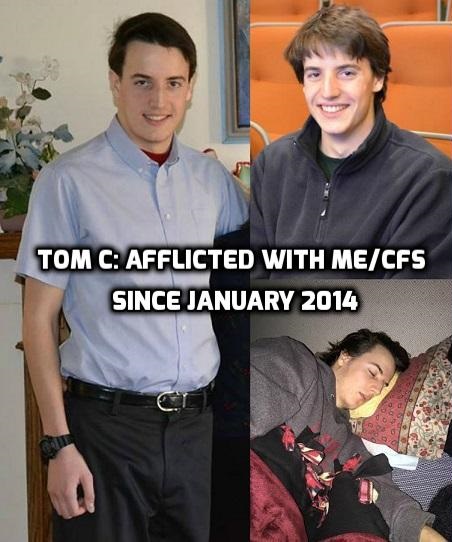 Follow these steps to inform your Senator to support the Resolution

Step 1: Call your State Senator and Assembly member
To find your California representatives, visit http://findyourrep.legislature.ca.gov/
Step 2: Call your Senator and Assembly Member. Sample script below courtesy of the Solve CFS Initiative, which advocates for research, accelerated discovery and treatment and funding for ME/CFS.
Feel free to tell the staff your story, but remember to be very brief. Use the sample script below as a guide.
My name is {YOUR NAME}. I’m a constituent in {city and zipcode}. I am calling with an urgent request for Senator OR Assembly Member {NAME} to VOTE YES ON SCR 40 which recognizes ME/CFS Awareness Month. ME/CFS stands for myalgic encephalomyelitis, commonly known as chronic fatigue syndrome. ME/CFS has no known cause, cure, diagnostic test, or FDA-approved treatment, and it often leaves patients bedridden for decades. Please urge Senator or Assembly Member {NAME} to support patients andVOTE YES ON SCR 40.
E-mail your representative
After you speak to the staff person by phone, it is always helpful to follow-up with an e-mail. Sometimes you will need to use the online e-mail form on the official’s website. Feel free to personalize the e-mail below.
Dear [Staffer’s Name],
My name is {YOUR NAME} and I am a constituent in {city and zipcode}.  I spoke with your office on {date of your call} previously regarding an urgent request regarding the disabling neuroimmune disease myalgic encephalomyelitis, commonly known as chronic fatigue syndrome or ME/CFS.
I am asking, as a constituent, that Senator OR Assembly Member {NAME} VOTE YES ON SCR 40 to support patients with ME/CFS.
For more information, please visit www.solvecfs.org
Sincerely,
{YOUR NAME}
{Your address and zipcode}

Relative to Myalgic Encephalomyelitis/Chronic Fatigue Syndrome Awareness Month.
LEGISLATIVE COUNSEL’S DIGEST
SCR 40, as introduced, Glazer. Myalgic Encephalomyelitis Awareness Month.
This measure would proclaim May 12, 2017, as Myalgic Encephalomyelitis/Chronic Fatigue Syndrome Awareness Day and declare the month of May 2017, and each May thereafter, as Myalgic Encephalomyelitis/Chronic Fatigue Syndrome Awareness Month.
Digest Key
Fiscal Committee: YES
Bill Text
WHEREAS, Myalgic Encephalomyelitis (ME), sometimes called Chronic Fatigue Syndrome (ME/CFS), is a neuroimmune disease characterized by overwhelming fatigue, “brain fog,” pain, postexertional malaise, headaches, cardiac symptoms, immune dysfunction, hypometabolism, lack of energy production at a cellular level, orthostatic intolerance, severe dizziness and balance problems, increased morbidity, and higher risk of suicide due to lack of treatments and neglect; and
WHEREAS, Between 100,000 and 300,000 Californians of all ages, races, and sexes are estimated to be afflicted with ME/CFS, with an estimated 836,000 to 2.5 million Americans afflicted and 17 million worldwide; and
WHEREAS, ME/CFS has been found by the National Academy of Medicine to be “a serious, chronic, complex, and systemic disease that frequently and dramatically limits the activities of affected patients,” leaving them with a lower quality of life than patients with multiple sclerosis, stroke, renal failure, heart failure, and other chronic diseases; and
WHEREAS, ME/CFS affects men, women, and children of all backgrounds, who are often ill for years or a lifetime. Most patients never recover fully. One-quarter of patients are housebound or bedridden, often for years, while one-half to three-quarters of patients are unable to work or attend school; and
WHEREAS, ME/CFS is perhaps the most common chronic disease causing students to drop out of high school and college, sometimes indefinitely; and
WHEREAS, ME/CFS is a tragic and disabling disease that destroys the lives of many patients and imposes a severe toll on their families, friends, and caretakers; and
WHEREAS, The federal Centers for Disease Control and Prevention (CDC) estimates that 84 percent of those with ME/CFS are either misdiagnosed or not diagnosed at all; and
WHEREAS, The National Academy of Science’s Institute of Medicine has stated that there is a “paucity of research to date, remarkably little research funding, that more research is essential, and that the level of current research does not reflect disease burden, prevalence, and economic cost to society”; and
WHEREAS, The economic impact of ME/CFS in the United States is estimated to be $20 billion to $50 billion per year (CDC February 2016) and likely costs the California economy billions of dollars in health care costs, patient care, lost productivity, and lost tax revenues; and
WHEREAS, Increased public awareness of the severity of ME/CFS will decrease the misplaced stigma and discrimination that accompanies the disease and will lead to increased National Institutes of Health (NIH) funding and private funding for research, treatment, and clinical education; and
WHEREAS, Because California is internationally recognized as a hub for all types of cutting-edge research, we are uniquely positioned to contribute to the development of diagnostic tests and treatments for the disease; and
WHEREAS, The cause of ME/CFS is unknown, there is no diagnostic test and no federal Food and Drug Administration (FDA)-approved treatments, and most patients have no access to doctors with expertise in ME/CFS since there is no training about the disease at most medical schools; and
WHEREAS, The lack of tracking for ME/CFS by the CDC and the grossly inadequate NIH funding for research based on disease burden have hindered progress in diagnosing and treating ME/CFS, such that there is no FDA-approved treatment for the disease; and
WHEREAS, These efforts are expected to contribute to a healthier, more productive California, United States, and world, and are expected to reduce health care costs by finding better treatments and an eventual cure for ME/CFS;
now, therefore, be it Resolved
by the Senate of the State of California, the Assembly thereof concurring, That the Legislature hereby proclaims May 12, 2017, as Myalgic Encephalomyelitis/Chronic Fatigue Syndrome Awareness Day, and declares the month of May 2017, and each May thereafter, as Myalgic Encephalomyelitis/Chronic Fatigue Syndrome Awareness Month, to help spread awareness of the disease and the need for increased research funding, and to support individuals living with ME/CFS;
and be it further Resolved,
That the Legislature urges state agencies, medical service providers, health care agencies, research facilities, medical schools, and the NIH, CDC, and FDA to work toward increasing clinical care, supportive care, and medical education and research funding for ME/CFS to a level commensurate with similarly prevalent diseases;
and be it further Resolved,
That the Legislature encourages schools, colleges, and media organizations to inform the public about ME/CFS;
and be it further Resolved,
That the Secretary of the Senate transmit copies of this resolution to the author for appropriate distribution.

Facebook
Twitter
WhatsApp
Email
PrevPreviousMeet the Millions Missing – Protest to Raise Awareness of ME in Scotland
NextJulie Rehmeyer’s memoir is out. Purchase her book today!Next

5 thoughts on “CA Senate will Vote on Resolution for ME/CFS Thursday – Call your Senator!”