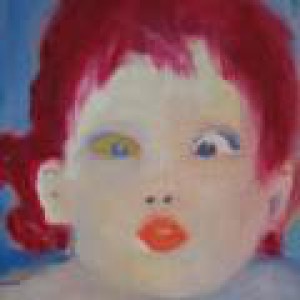 I am the founder of the worldwide, online art project Blue Mark For M.E.
All Posts

As an M.E. patient I am known to have low-grade headaches rather often; but two years ago, I was hit by an acute headache from hell that lasted for weeks on end, one so awful that I was thankful for those days I only had to deal with a medium grade headache. I consulted a neurologist, whose first remark was about the number of other specialists I frequented over the years, according to the computer files.
All I wanted to do was put my head on the table. I did not feel the need to scream from rage or cry because I was feeling sad. I just wanted to put my head on the table, close my eyes, and let this madness wash over me.

It felt like the world had gone mad. How could I explain to this doctor that I suspected him of being biased? That I was in need of an objective consultation – regardless other symptoms for which I consulted his colleagues – but with his attitude I didn’t stand a chance?
After checking my vitals and reflexes, I was sent home with the suggestion to follow therapy for dealing with somatization. A somatization disorder is the manifestation of psychological distress by the presentation of bodily symptoms, this is supposed to be treated with cognitive behavioral therapy. Personally, I found this almost unbelievable, and I am not the only one with this observation. Other patients with Myalgic Encephalomyelitis often share similar stories.
We depend on doctors. Doctors are the authority we turn to when we experience difficulties with our bodies or are in pain, and one cannot begin to fathom what it feels like not to be acknowledged by those we trust with our health. To be turned down for the umpteenth time, simply because they cannot find anything wrong with us, and are not willing to dig deeper. Let me tell you that this is only what happens with M.E. patients directly.
Indirectly, these same things happen because we have (mostly, but not entirely) unexplained symptoms. The World Health Organization classifies our illness as ‘a debilitating neurological disease’, but other systems, such as the endocrine or immune systems, might be very important. However, it will take time before we can be sure, since the budget for M.E. is extremely low. Neither the government in the United States, United Kingdom nor the Dutch government, as in my case, is willing to spend money to fund research. Apart from that, there is the problem of getting an allowance by that same government.  Many people with M.E. don’t have that financial safety net they were counting on while working. Indeed, no disability allowance for me, but at least I am blessed with a partner who has a steady job.
I cannot believe that mankind was able to go to the moon half a century ago, but when it comes to this puzzling disease (whatever it may turn out to be in perhaps another fifty years) it seems the earth is flat, I often complain.

We lose both ways

That is what we do: we, people with M.E., we complain. We complain that research into M.E. is mostly treated with cognitive behavioral therapy. And we moan when proposals for research in relation to physiological and biochemical abnormalities are denied funding. Furthermore, we object about the lack of funding for research in general. This leads to screaming about the misery, crying for being misunderstood and everything in between.
On top of that, the people we need for support (such as family, friends and journalists) don’t know what to think. A friend can doubt our illness, because it is something the doctors don’t understand. Where do we – people who are drastically tired – find the energy to keep fretting over this misery? a family member might ponder. Can’t we be happy with those few articles that do find their way to the media? a journalist might suggest.
In our defensive attitude we lose both ways. Let us use this article as a way to demonstrate it. On the one hand, I simply try to find sympathy, I – as one of those many – want to be heard, even though I am not doing good. I defend myself for finding the energy to write this article by explaining that the progress we have made has taken many, many baby steps. Other patients, who also try to reach the outside world, might angrily speak up by referring to the time they need to recover, because of the lack of a proper stamina, by saying they are paying for this. Unintentionally, we facilitate those who think it is all in our head, because we ask for attention and compassion with energy we don’t have.
On the other hand, if we don’t protest to all this misfortune – if I don’t write this article – we will never be heard. And we might even be understood to be lethargic as if we are too low, too depressed to even challenge these things.
I cannot and shall not be tempted to try and explain the nature of this tumult we cause. That neurologist is not a psychologist, nor am I. All I know is, that it would mean the world to us if you want to think or rethink what you know about Myalgic Encephalomyelitis. You might be a family member or friend, journalist, doctor, politician or another member of the general public to whom it perhaps is not clear what it feels like to suffer from this. Please, ask us.
Please, help us to shift the public perception of M.E., and save us from this madness.
READ MORE (also available in Dutch.