Covid-19 Resources for People with ME

Resources for reporters covering ME: What is ME? |  Selected Media Coverage of ME |  Films and books about ME

We are an international network of patients fighting for health equality for Myalgic Encephalomyelitis (ME) and Chronic Fatigue Syndrome (CFS). We were founded with the belief that while we may find it difficult to advocate for ourselves in the physical world due to the constraints of our illness, we can join together online to become an unstoppable force. Together, we are building a movement.

Myalgic Encephalomyelitis (ME), commonly known as Chronic Fatigue Syndrome (CFS) or ME/CFS, is a devastating multi-system disease that causes dysfunction of the neurological, immune, endocrine and energy metabolism systems.

The disease often follows an infection and leaves 75% of those affected unable to work and 25% homebound or bedridden. An estimated 15-30 million people around the world are suffering from ME; at least 1 million Americans, 250,000 British people, 100,000 Australians, and 560,000 Canadians have ME.  Only 5 percent are estimated to recover.

ME is a spectrum disease. All people with ME experience a substantial loss of physical of cognitive functioning, but there is a wide spectrum of severity. On average, ME patients score more poorly on quality of life surveys than those with multiple sclerosis, stroke, diabetes, renal failure, lung disease, heart failure, and various cancers. At the most severe end of the spectrum, patients may live the rest of their lives in darkened rooms, unable to tolerate light, sound, or human touch. Read more.

A world with accessible, compassionate treatment and support for people with ME

We mobilize patients and allies to advocate for equitable public investment in research, clinical care, and medical education. Our emphasis is on community organizing in order to create a sustainable movement that includes all voices.

We build community to create networks of support, friendship and creativity between patients, caregivers and allies.

We educate doctors, nurses and other health professionals to encourage empathetic, knowledgeable care for all.

We inspire a new generation of researchers to join the field through our outreach and fellowship programs.

We reach the wider world through press and a variety of multimedia education tools to gain mass recognition of ME as a debilitating disease suffered by millions.

Everyday, #MEAction is working with the community to take actions that will achieve equitable treatment for people with ME. The lack of research funding, medical education and public awareness about ME is so staggering that we are often forced to take to the streets to demand that governments respond to this crisis with the urgency that it requires. Our global community first took to the streets two years ago in a movement that became known as the #MillionsMissing to represent:

#MEAction has since organized four global protests in the past two years. Last May, 100 cities around the world participated to demand change from their governments, and thousands more protested virtually from their beds, too sick to leave their homes.

Our protests have resulted in securing meetings with government officials, and building allies with our political representatives. Most recently, our global protest led us to deliver a statement of demands to the National Institutes of Health (NIH) that we will address in an upcoming meeting with NIH director, Dr. Francis Collins. Read more at millionsmissing.org.

Most recently, we have been working with the Centers for Disease Control and Prevention (CDC) in the U.S. and with the National Institute for Health and Care Excellence (NICE) in the U.K. as they update national medical guidelines for ME. It is critical that the guidelines informing doctors are robust and reflective of the biomedical research and patients’ experience.

Our focus is also on building allies within Congress and Parliament in order to put pressure on the federal agencies to take immediate and urgent action to address this health crisis. Our congressional team is currently working to pass a resolution for ME through the Senate, and to secure a hearing about the clinical crisis of ME in the House. In the UK, #MEAction UK secured a three-hour debate in Westminster Hall on ME last June.

Living with ME can be an incredibly isolating and difficult experience. Since very few doctors have been educated about ME, and there is no good diagnostic test clinically available, nor FDA-approved treatments, patients often encounter very little support from the medical profession or, even worse, face hostility and disbelief.

The majority of people with ME also find it difficult to sustain long periods of activity, or are unable to leave their homes entirely. This has necessitated that we find each other online, and that we share knowledge, resources and compassion with one another about how to live with this disease.

Building our community online also enables us to show our health leadership and politicians that there are hundreds of thousands of us demanding urgent change. We are able to leverage our voices together. Currently, our email list reaches more than 35,000 people worldwide; our Facebook page has nearly 13,400 followers, and we have an active, global network of over 200 volunteers. Our website receives more than 100,000 page views per month.

In May of 2017, #MEAction hosted a virtual festival called #BedFest to showcase the art and experience of people living with ME as expressed through song, imagery and poetry.

Visual artist and #BedFest contributor, Kate Stewart, wrote about what it means to be an artist as someone with ME, “I will always be a poet and an artist first, and an M.E. patient second. This is even if I never finish another piece outside of my mind and in my unfortunate real world.”

#Bedfest was inspired by musician and person with ME, Kaeley Pruitt-Hamm, who recorded an EP from her bed called “Hi From Pillows.”

Art, songs and poetry featured on the BedFest website.

We’re reaching doctors, nurses and other health professionals to encourage empathetic, knowledgeable care for all, and are inspiring new clinicians and scientists to join the field.

We are working to provide Continuing Medical Education courses about ME to doctors, nurses and health professionals. Through a partnership with the American Medical Women’s Association and Indiana University, Unrest can now be watched for CME credits. #MEAction is working hard to get the word out to clinicians so that more medical professionals know what ME is and how to provide empathetic care to their patients. We launched our #MEAction Young Researcher Fellowship and are supporting the work of two, young researchers this year with the goal to grow the field of ME researchers by supporting aspiring research scientists early in their careers.

Our community is continually building a wiki encyclopedia about the history and science of ME, called MEPedia, written by patients, young clinicians and investigators. MEpedia’s 2,120 articles have been viewed more than six million times! We keep clinicians and researchers informed about the latest science, conferences and funding opportunities through our quarterly newsletter. Visit MEpedia.

#MEAction is the main organizational partner for the award-winning documentary film about ME, Unrest.  Together with the larger “Time for Unrest” global campaign, #MEAction is using screenings and actions around Unrest to strengthen the growing movement advocating for more recognition, education, research, and funding around ME. Learn more about Unrest at unrest.film.com.

The Unrest screening held at the historic Regent Theatre in Boston attracted an audience of 358 viewers, and was co-sponsored by 19 government, healthcare, disability, arts, academic, religious and women’s organizations.

Jennifer Brea and Beth Mazur co-founded #MEAction with the vision to amplify the voice of the community using online platforms, technology and social media. Brea is an independent documentary filmmaker who co-created the Sundance award-winning feature documentary, Unrest. She also is a TED Talker. (Find her TED talk here: ted.com/speakers/jen_brea.) Brea was pursuing her doctorate at Harvard before she fell ill.

Beth earned her Bachelor’s in Computer Science and Electrical Engineering from MIT, and worked as adeveloper and technical product manager for various for-profit and non-profit technology companies before developing ME.

Meet the full team, the majority of whom have ME.

Meet our Board of Directors

Follow @meactnet
In reply to
10 hours ago
That was so great!!! Thanks to all who joined in!
View on Twitter
1
3
#MEAction Network @MEActNet
13 hours ago
We are live!!! Join my computer, mobile phone, or tablet here: https://t.co/dTcjvkMZQC 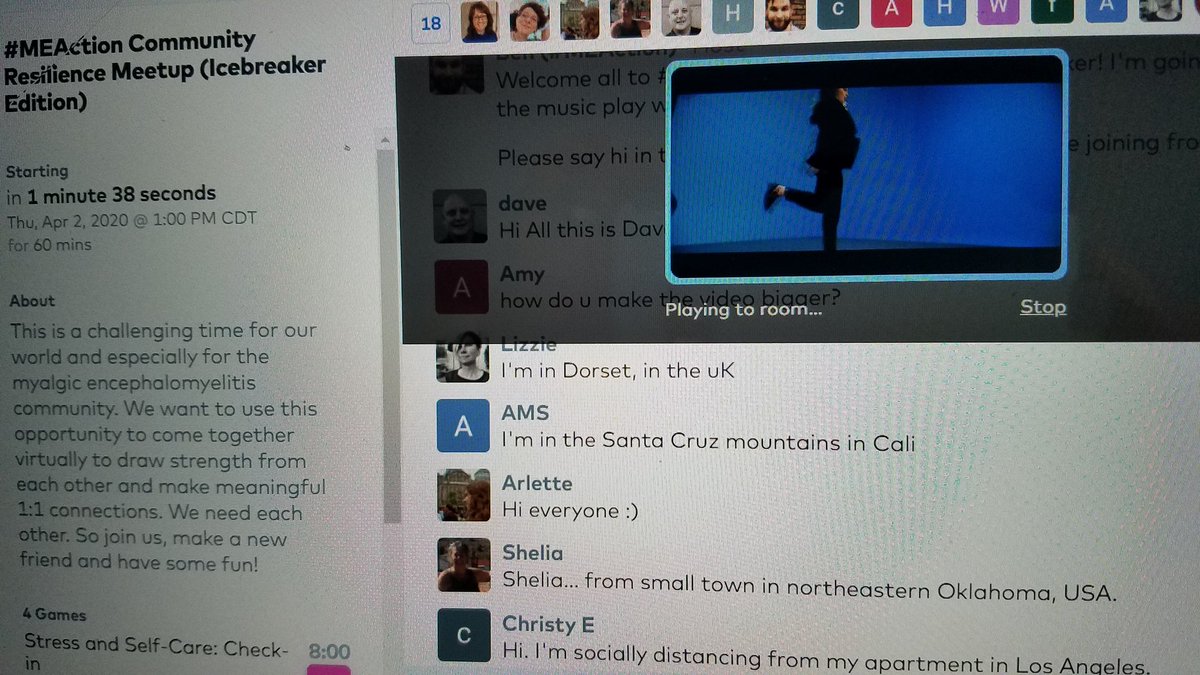 5
3
#MEAction Network @MEActNet
14 hours ago
In 30 minutes!!! We are excited to join you all at 2 pm EDT! #pwME #MyalgicE #MEAction #millionsmissing #community https://t.co/3cnkgdG864
View on Twitter 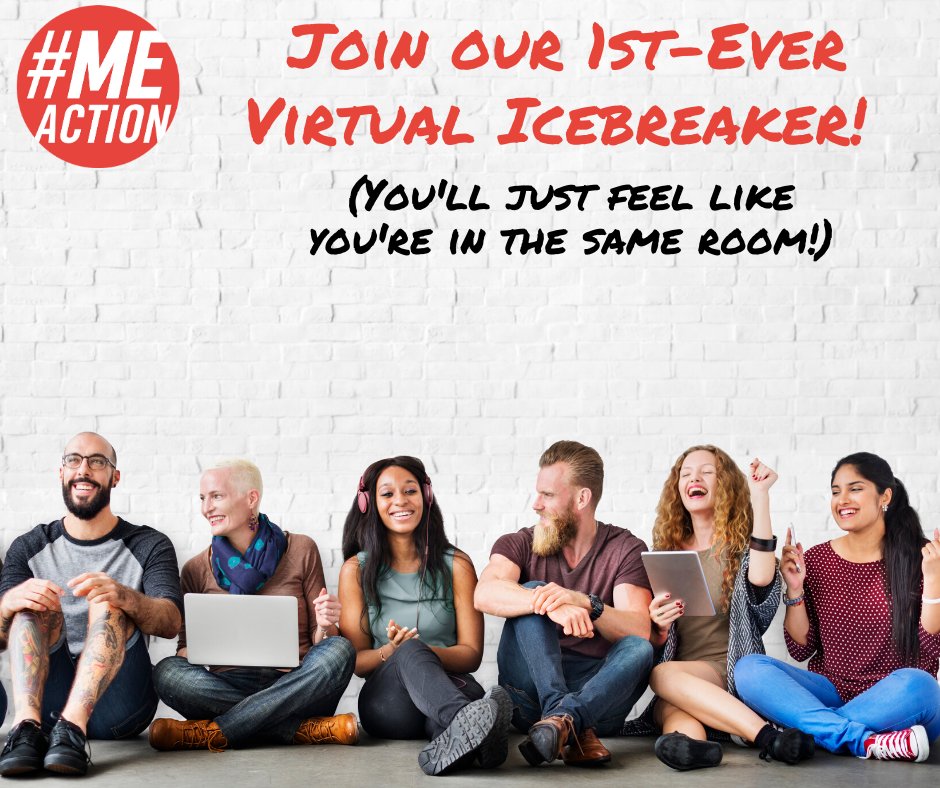 #MEAction Network @MEActNet
We cannot wait for you to join our 1st-ever Virtual Icebreaker for our Community Resilience Call TODAY! We think this will be great tool for making connections & getting to know one another. Join us at 2 pm EDT/ 7 pm BST! #pwME #StayHome

DETAILS: https://t.co/DJseAmEnhf https://t.co/FSvFEJTvIg
6
8
#MEAction Network @MEActNet
16 hours ago
Do you have any go-to #icebreaker prompts? A fun "would you rather" question?

At a time when we need to feel together more than ever, we hope this provides the perfect space to connect! Join us today at 2 pm EDT! #pwME #MEAction #StayHome #spoonie

https://t.co/DJseAmEnhf
View on Twitter
5
7
#MEAction Network @MEActNet
17 hours ago
We cannot wait for you to join our 1st-ever Virtual Icebreaker for our Community Resilience Call TODAY! We think this will be great tool for making connections & getting to know one another. Join us at 2 pm EDT/ 7 pm BST! #pwME #StayHome

As we head into the holiday season, our minds turn to cozy pjs, staying comfy, and...well okay we think of...

Are you ready to shop for some great items and also do some good by supporting #MEAction?!?! We...

"Diagnosis is a Process, Not an Event" will resonate with many people with ME! What happens as you become chronically...

Diagnosis Is A Process, Not An Event
When it comes to chronic illness, the way we see diagnosis depicted on TV is a fantasy. Here’s how it
medium.com
View on Facebook

Holiday shopping season is here! If you shop with Amazon, please remember to use AmazonSmile to support #MEAction...

Most people don't take the time to donate but if every visitor pledged just $2 per month on a recurring basis, we could fully fund #MEAction.

Get updates on major news and action alerts